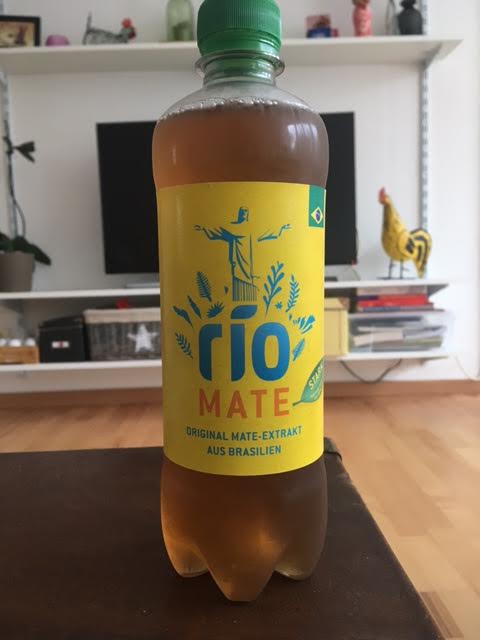 I went to the supermarkt here in Regensburg today and was pleased to see that I now have up to three yerba mate-based drinks to choose from. While the most popular yerba mate soda in Germany continues to be Club Mate, other companies seem to be trying to catch on to their success. While browsing through an endless selection of schorles (German word for soda), a colorful Brazilian-styled bottle caught my eye. The label read “Rio Mate” and had an image of  Christ the Redeemer on it.

Rio Mate is produced by the privately owned Husum Water International GmbH;  a company that ranks among the top 25 from around 200 such companies in Germany. With more than 100 million fillings per year and more than 70 employees, they are one of the largest mineral fountains in North Germany.

Rio Mate smells rather untypical for a Mate lemonade and reminded me of a Kombucha or some other fermented beverage. The first whiff I took reminded me a more of an energy drink than an authentic Carioca mate, thus the name has absolutely nothing to do with the content.

Rio Mate ended up being a pretty bitter experience and had nothing to do with the cold mates that are so popular at the beaches of Rio de Janeiro. The flavor itself is closer to a ginger ale or poorly sweetened lemonade made with carbonated water. To be fair, there is a quite distinctive taste of yerba mate, which kicks in for a few seconds after each gulp.

If you are looking for the real Mate from Rio, then go look somewhere else. With a strong sourness of lemon, noticeable bitter tone of yerba mate and the texture of a Red Bull,  Rio Mate is neither of these and kind of lacks in identity. May be appealing to the German taste of turning everything into a carbonated drink, but fell quite short of my expectations. The packaging is nice though….