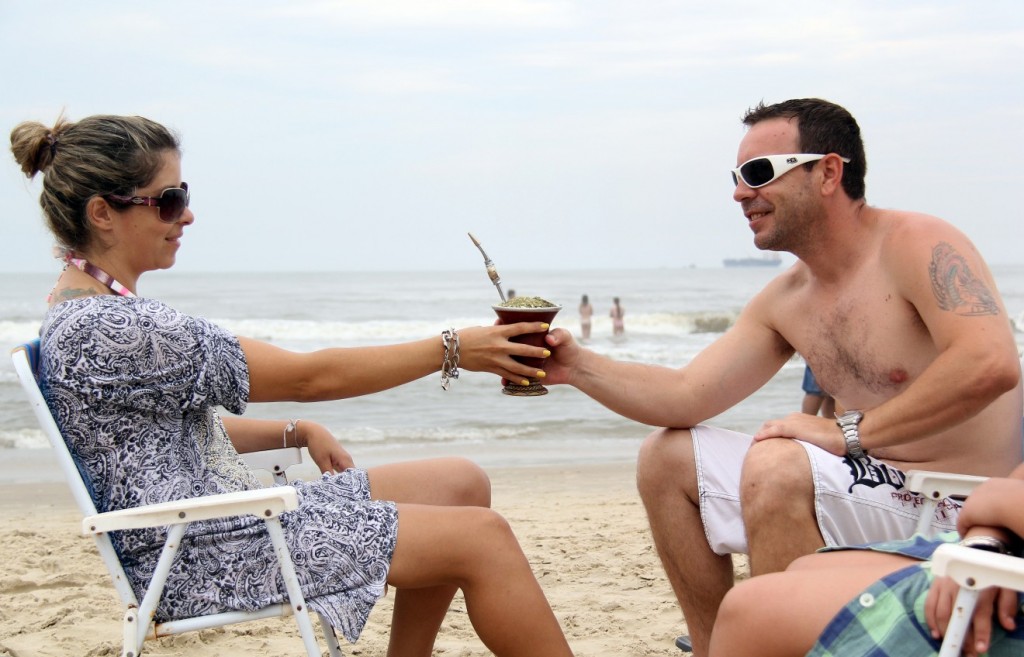 Drinking Chimarrão is a daily habit to most southern Brazilians, but slow market growth is forcing the yerba mate industry of Rio Grande do Sul to reinvent itself.

The market has proven to be a bit too bitter even for Brazil’s bitterest drink.  After struggling with low sales in the last 6 years, Rio Grande do Sul’s leading yerba mate producers are having to re-think, re-market and recycle some of their key strategies. In order to increase revenue, the industry is now reaching out to a younger and more urbanized audience; dropping some of it’s own traditions along the way.

In the spirit of adjusting to newer and harsher times, companies are launching an institutional campaign to publicize the product, but not limited to the traditional gaucho as typical consumer.  Other strategies consist in bringing out novelties like vacuum packed yerbas and polyethylene gourds; something that not long ago would have been considered a heresy to the most conservative.

According to Barão de Cotegipe’s Sérgio Picolo, the industry is moving towards producing greener and less bitter mates. In Brazil, this has been possible by using newer drying technologies and by mixing yerba grown in native forests of Paraná with yerba planted in the Rio Grande region. Picolo’s company has also replaced the traditional paper bag packaging with a new vacuum packing, which extends the shelf life up to 18 months.

According to Amater-RS (A institution of agriculture in Rio Grande do Sul), chimarrão consumption has witnessed a small growth in the last 7 years (from 100 to 110 thousand annual tons).  During the same period of time, production increased considerably from 50 thousand to 70 thousand tons per year. The most loyal customers are still the older generations and the rural communities, but the demand in urban areas has been increasing steadily. In Porto Alegre, for example, hundreds of people gather at the Brique (a traditional antique market) on weekends. Most of them carrying along their faithful gourd and thermos flasks.

The advertising and marketing expert Cristiana Ferronatto, 31, is the type of consumer that yerba mate producers are trying to conquer. She started drinking mate at age 15, under the influence of family and friends and now has the habit of drinking mate with co-workers on weekends.

“It creates a relaxed environment”, said Cristiana. “Drinking mate also brings people together because normally it is shared, and acts as a good substitute for coffee”, she added.

Cristiana only purchases the best-known brands or by indication from friends and relatives. She feels that the promotion of mate is insufficient, an opinion which is shared by several Brazilian chimarrão companies. Some companies have launched the so-called “mateadas” or tasting sessions in universities, but a more structured campaign has always bumped into costs, since most of the 200 companies operating in Rio Grande do Sul are small. Barão de Cotegipe, for example, is one of Brazil’s largest and most established brands, but only generates a yearly revenue of around 3 million dollars with monthly sales of 500 tons, where 30% is sent to the foreign market.

Brazil’s yerba mate industry is also betting on  quality assurance in order to boost sales. New certifications have been brought out to reward lack of chemicals, proper hygiene as well as proper storage and transportation.  Last, but not least, companies have begun to promote the use of plastic mates. They are an ideal accessory, for their light weight and ease of maintenance in comparison to traditional porongo gourds. The production of plastic mates is on the rise in Rio Grande do Sul and many businesses are using them to give away as branded souvenirs.

“Recently, we have had orders from several branches. Even a funeral home”, revealed Ezídio Zorzi. Owner of a local plastic mate manufacturer.